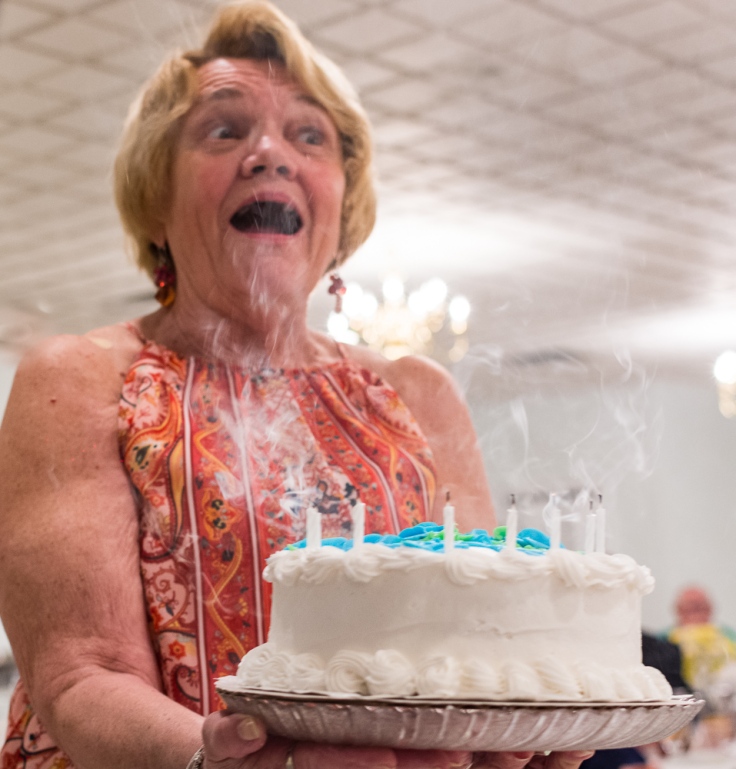 We were attending a 50th wedding anniversary party for our brother-and-sister-in-law. Few people knew it was also my husband Bob’s 80th birthday, so when the hostess carried in a birthday cake, it was a big surprise to everyone, including Bob. Mouth-dropping shock was the response of all the guests when Bob stood up and clapped his hands together above the cake, instantaneously extinguishing every candle. Spontaneous applause erupted in the room. As you can see from the picture I captured, the hostess was possibly more surprised than anyone else. Thankfully she didn’t drop the cake.

In response to The Daily Post’s writing prompt: “Mouth Drop.”

This week I had an opportunity to capture pictures of our springer spaniel, Gulliver, and his two cousins, Cooper and Mabel, so I am departing from my usual photowalking routine to post their pictures.

Having caught a nasty, lingering cold, my excuse for not taking a photowalk, I figured today would be a good opportunity to introduce the pooches and shine a little bloglight on them.

Gulliver originally lived with our daughter and son-in-law, but he has ruled the roost (to mix metaphors) at our house for about 12 years. He’s our second “springer,” and was adopted into our family when he was a very young pup. As a senior dog, he has lost most of his hearing and slowed down quite a bit, but he still enjoys an evening walk in the park and seemingly can tell time because he knows when the daily mail (and dog treat) delivery is due.

Cooper, a Portuguese water dog, joined our daughter and son-in-law’s household when Millie, their first English sheepdog, died. At first, they were in no hurry to get another dog, but pretty quickly realized that they needed a dog around the house. That’s when they “found” Cooper, a delightful, lovable, energetic ball of black fur.

The last of this trio is Mabel, who erroneously thinks she’s a lapdog! Walk into their house and sit down, and Mabel will want to bounce into your lap (and no, she doesn’t ask permission first). She’s a great watchdog though, as the people who come to their door or walk up the sidewalk past their house quickly discover. If she doesn’t know you, she isn’t going to open the door and invite you in.

That’s the canine branch of our family or part of it…at least those that live nearby. All our children and grandchildren have dogs, except for the eldest granddaughter who lives in an apartment with her cats! They all seem to agree with me that a family isn’t complete without a pet (or in some cases two or three) in the house.