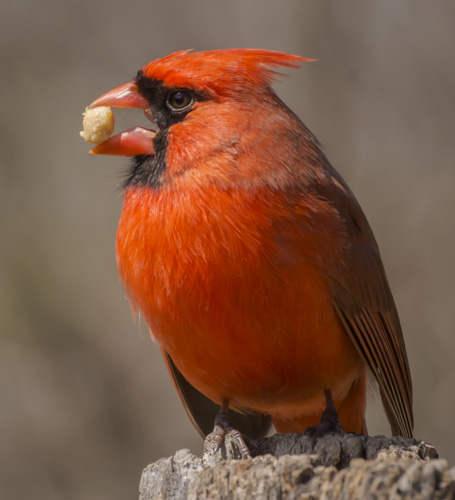 That may be a bit of an exaggeration because I don’t suppose everybody likes a cardinal, but it is no stretch to say that he gets his share of attention, both in the park and on my blog. So he is the headliner today. He really did pose beautifully, so I suppose he deserves that status, but there are two other birds I want to share today.

I saw the yellow-rumped warbler for the first time this spring. I was standing by the bog in Chagrin River Park, talking to another photographer about how there didn’t seem to be much of any interest to see today when this flashy bird landed on the tree right in front of us. Wrong! We were wrong. And we were both glad. He is a common warbler, but I actually had to google him to get his name. Hopefully I’ve got it right. If I’m wrong, I’m sure someone will let me know. Some people call him “butter butt” because of the bright yellow feathers on his rump. 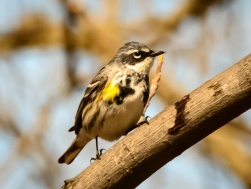 The downy woodpecker was posing today too, so I took his picture, but when I got home and took a closer look, I realized another bird, the yellow-bellied sapsucker, had photo-bombed the downy. My camera caught him, but I didn’t realize it until I looked at the pictures on my computer. 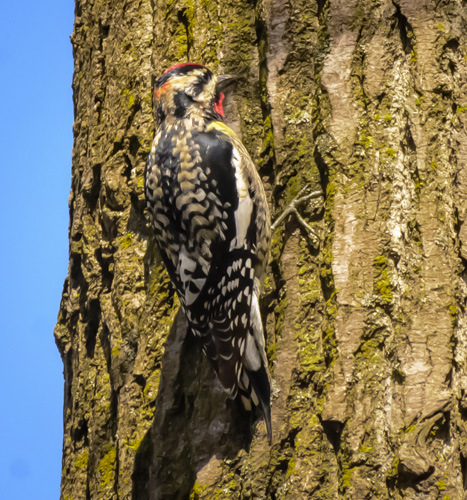 That’s it for today. Two surprise birds makes for a pretty good trail walk, and proves that spring is actually here, despite the cold weather and the snow we had last week.

Thanks for joining me on the trail today.
See you soon!
Trail Walker