Two years ago when the Tall Ships visited Ohio, Bob and I and our granddaughter, Carrie, drove into Cleveland to see them. That was my first time to get  close up to the tall ships, and I tried to capture as many different pictures as I could. This week they returned to the Great Lakes to participate in the Tall Ships Challenge, a race through the Great Lakes, the world’s largest body of fresh surface water. This would be my second opportunity to photograph these beautiful ships, but this year, instead of trying to capture as many pictures as possible,  I was on a single-minded quest to tour a Viking ship from Norway, the Draken Harald Härfagre, and, if possible, to connect with Kalle, a member of their Expedition America 2016 team.

What was my quest?

In the spring of 2016, one of the photographers I follow on my photo-a-day site (Blipfoto.com) wrote several posts in her photo journal about her “nephew” Kalle and the Viking tall ship from Norway, which was preparing to set off on a voyage across the North Atlantic, and into the Great Lakes. I googled Draken and discovered that they would be visiting Fairport Harbor, Ohio, on July 8-10, only 15 minutes away from my home! I immediately began to think about what fun it would be to meet Kalle, take his picture, and post it on Blipfoto for my friend Betsey. That was my quest, and on Friday I set out to fulfill it.

There were about eight Tall Ships with homeports as close as Erie, Pennsylvania, and as far away as Milwaukee, Wisconsin, Baltimore, Maryland, New York, New York, and Haugesund, Norway, tied up along the Grand River, just inside the breakwater from Lake Erie. What a sight they made!

As soon as we paid our admission and passed the security checkpoint, I headed down the line of ships. They were all beautiful and, as we had purchased tickets to tour the ships, we could have boarded any one of them, but I was on a quest, so I continued my walk  down the quay, searching for the Draken, until I reached the sign below. There we joined a line of people waiting to board the ship.

Thankfully it was only about 15 minutes before we stepped onto the deck of the Draken and joined the small group pictured below for a guided tour of the ship, narrated by crew members. An unbelievable 4000 people had applied to join the 32 member crew of the Draken, the largest Viking ship to sail in modern days. The men and women we saw today were the lucky ones. After standing on the deck, looking around, and imagining what a challenge it would be to weather the rough seas of the North Atlantic on this small vessel, I have the greatest respect for each one of them. May God go with them and the winds be favorable as they continue their voyage through the Great Lakes and eventually back across the North Atlantic to Norway.

Below is a gallery of pictures I shot during our tour. If you want to know more about the construction of the modern day Viking ship and its launching, click the links and view the videos. 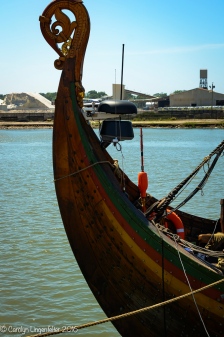 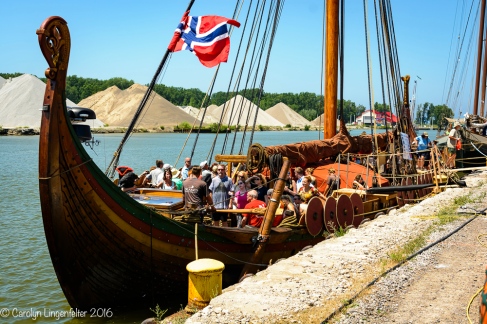 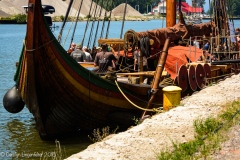 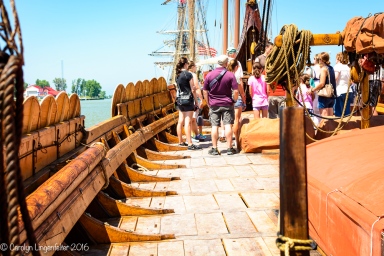 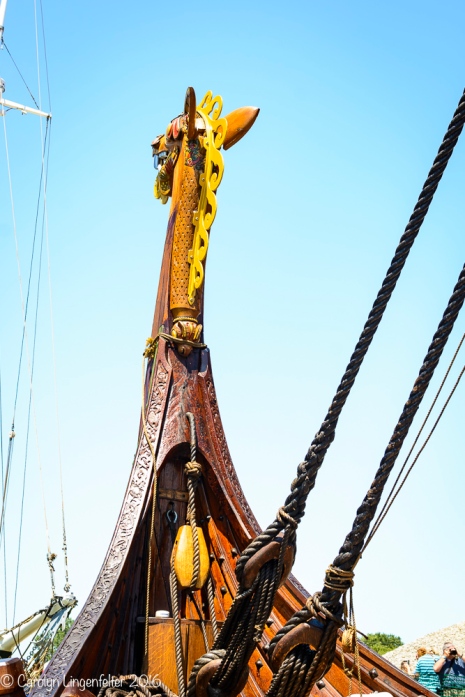 There was something very special about standing on the deck of the Draken and meeting some of the crew, but I still had to complete the second part of my quest…to meet Kalle and take his picture. So I asked one of the crew where I might find him and was directed to the Draken’s merchandise tent just down the quay from the ship. A few minutes later I was face-to-face with the very tall, red-bearded man I had first seen in Betsey’s journal on Blipfoto. Although I already knew the answer, I said, “Are you Kalle?” His puzzled look turned to amazement, and then, I think, to joy, when I mentioned Blipfoto and Betsey, and he realized why I was there. My quest was complete.

Thank you, Kalle, for posing for the camera so graciously; thank you, Marti, my friend, for taking the picture of me with Kalle; thank you Blipfoto, a fantastic community of photographers and friends, where amazing connections are made, and, if you have taken the time to read this extra long blog entry, thank you for joining me on today’s trail walk. If you have time, you can click here to see the journal entry I posted for my friend Betsey on Blipfoto.

My next trail walk will be on Tuesday (tomorrow).
See you then.
Trail Walker