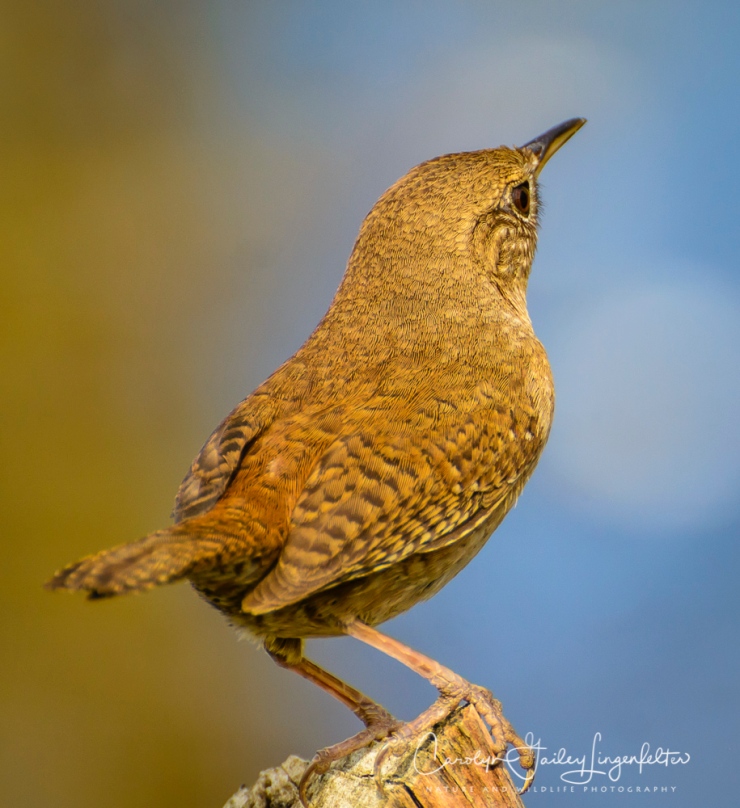 When we’re talking birds, migration is a fascinating topic, especially in the spring when the woods are awake with the sight and song of the warblers and other birds that haven’t been around during the cold winter months.

The bird pictured above, a house wren, is small and looks sweet, but according to my i-bird app, they are fiercely territorial and have been known to destroy the eggs of bluebirds and other small birds. So…definitely not sweet! However it is fun to watch them “feather their nesting holes” and settle in for the summer. One afternoon this week I hung around for a half-hour or so and watched for this little one to return to the nesting hole. When she did, I snapped a sequence of pictures as she came to her “front door” and peered outside. 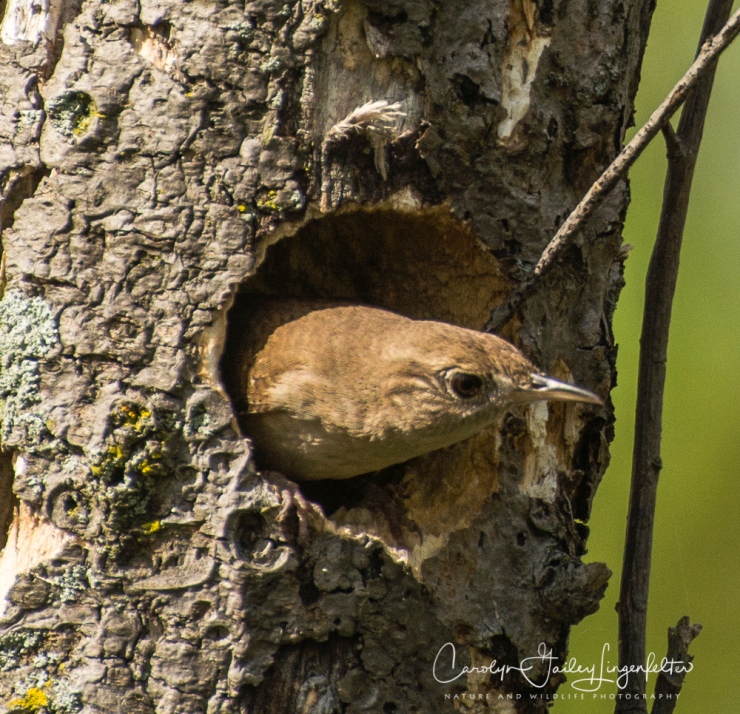 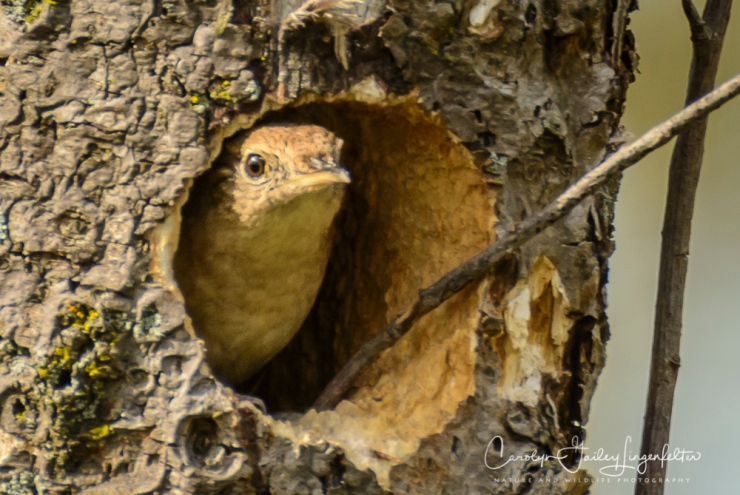 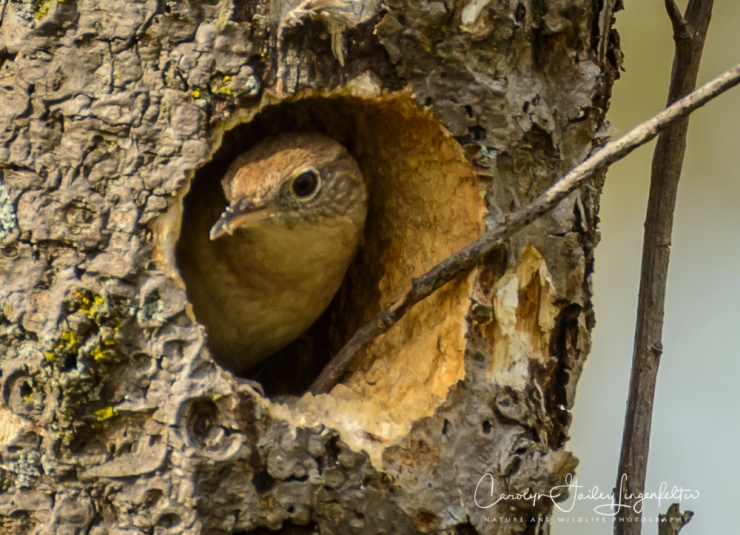 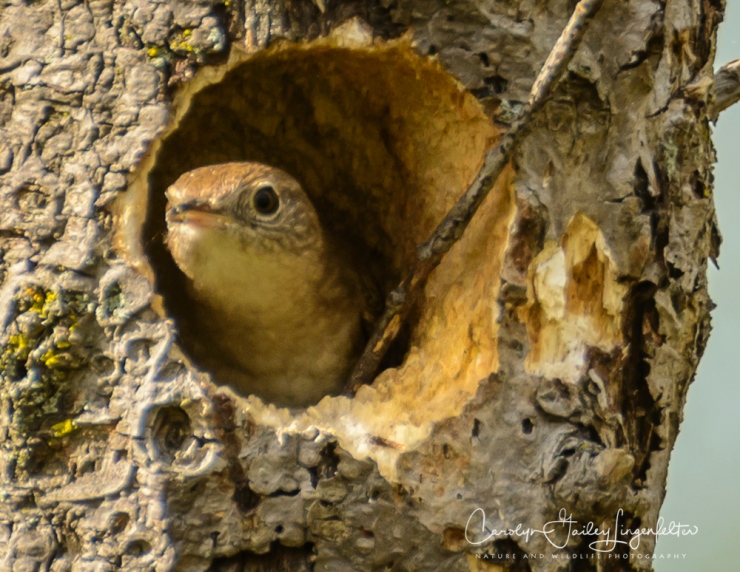 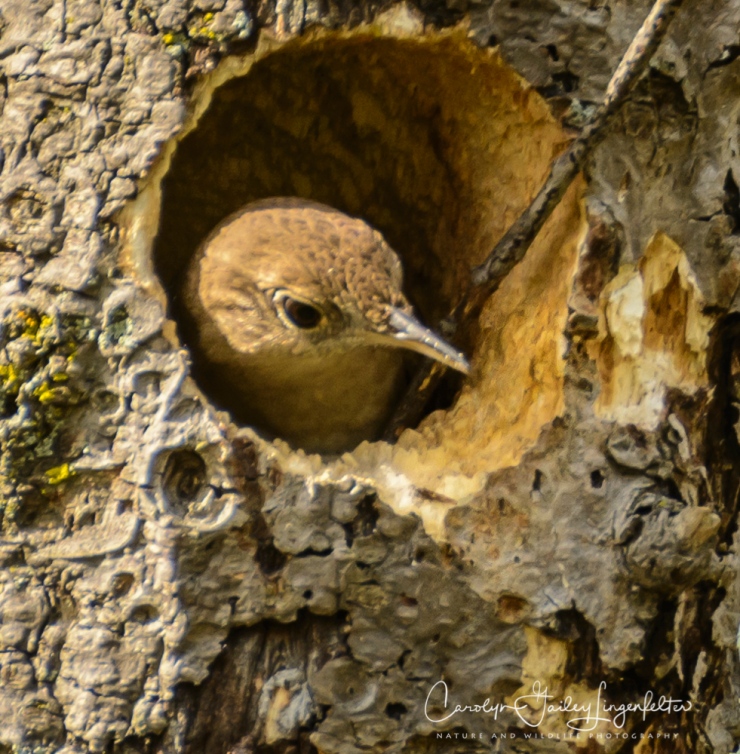 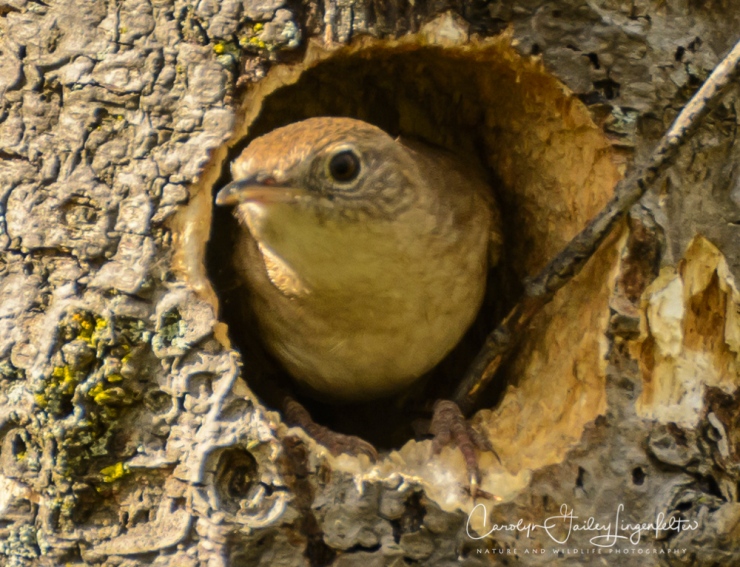 Look closely and, in a few of the pictures, you can see the “sawdust” on her beak, a result of her efforts to excavate the nest. That’s something human mothers don’t have to do to provide a home for their newborn babies.

This same skinny tree has been used before, perhaps by the same wren. Reportedly they can live up to seven years in the wild, so this could be the same little bird I’ve seen in past years. However, this year the entrance to the nest is on the side of the tree facing the trail. In previous years, it was on the other side; the bird would fly up to the (very skinny) tree, land on the side facing the bog, and disappear inside. She is just one of numerous wrens that have returned to the bog in recent days. I don’t know how many there are, but, according to Wikipedia, the house wren is the most widely distributed bird in the Americas, and as I walk along the trail, I can hear their melodic song from high and low on both sides of the trail.

One final fact for this post is that a group of wrens can be referred to by several different names: a chime, flight, flock, or even a herd of wrens. A herd of wrens? That takes me back to my teen years when I would go with my father to inspect the herds of dairy cows that produced milk the farmers were shipping to market in Philadelphia. That was another time, another place, and a very different animal from this herd of wrens that has moved into Chagrin River Park for the summer. I wonder who would possibly have come up with the term “herd of wrens?” As a term for a group of wrens, it certainly doesn’t work for me; nevertheless, the park is filled with their song, and I enjoy seeing and hearing this “herd” of migratory birds.

Thanks for joining me on the trail today.
See you soon. ~Trail Walker

7 Replies to “The wrens have returned!”