As I watched through the kitchen window on a recent winter morning, this little squirrel appeared on the scene: 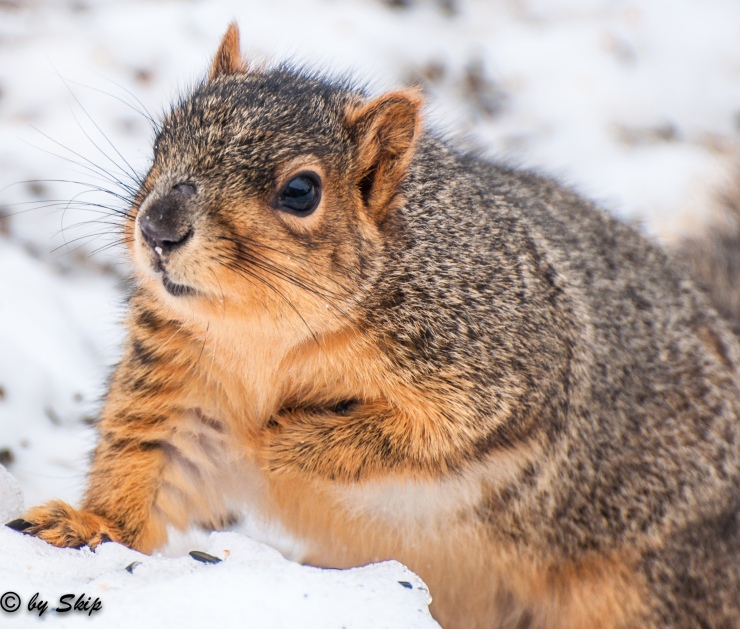 She discovered a big cake of bird seed on the ground, apparently knocked down by one of the deer that make regular overnight visits to our back yard bird buffet. Being a curious little squirrel… 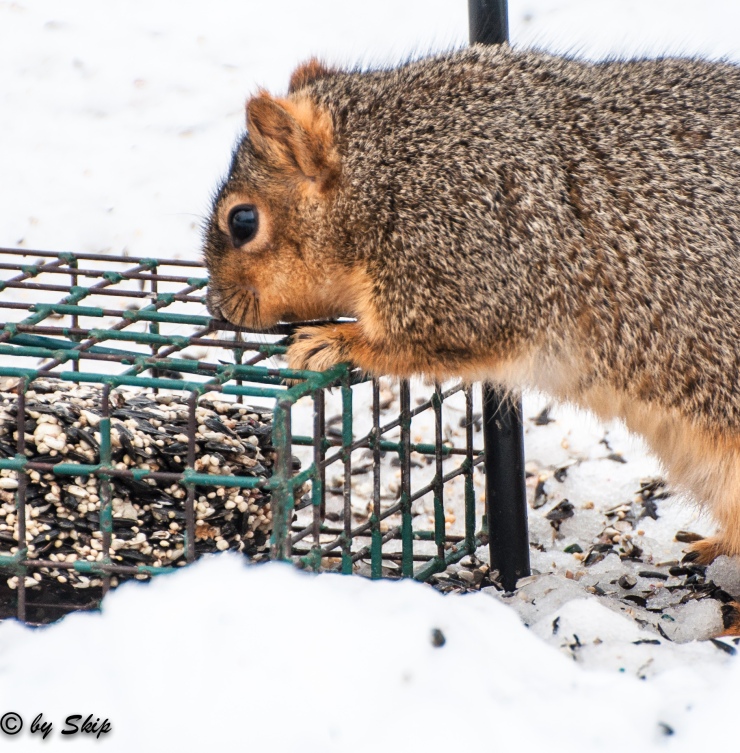 …and apparently a hungry one, she began to investigate the seed block from all angles to see if there was a way she could get at the goodies inside the wire cage. It was no small challenge for a young squirrel, but she had something going for her: determination. 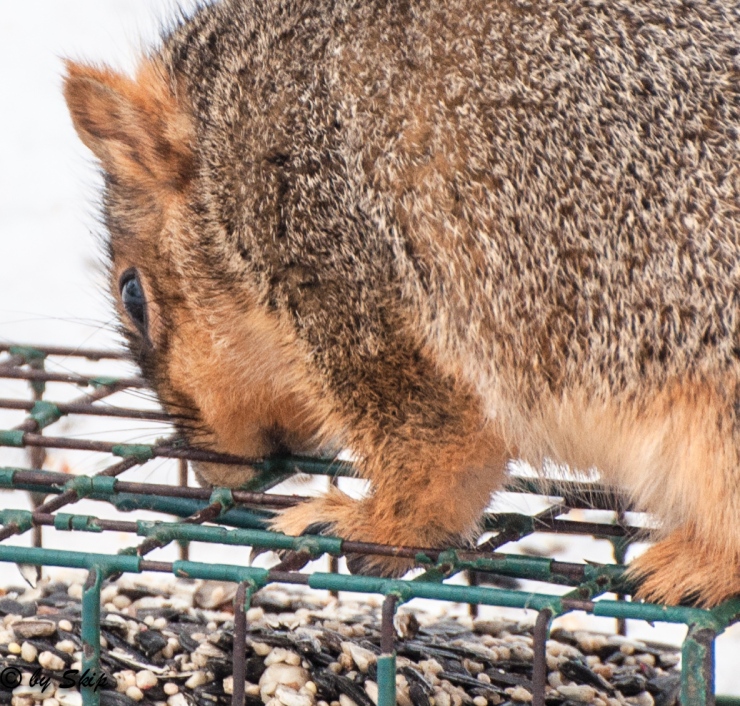 Climbing on top of the wire cage to survey the situation, she began her battle with the wire cage by putting her teeth to work. Unfortunately, although she has sharp little teeth, she still couldn’t reach the seed cake and she couldn’t bite through the wire. Hmmmm…what could she do next? 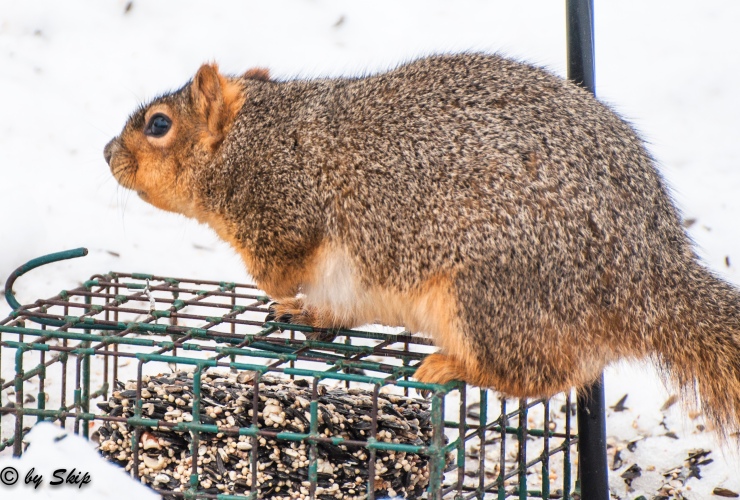 She took a little break and thought through the situation. Realizing that she couldn’t reach the good stuff inside the cage while sitting on top of it, she jumped to the ground and renewed the attack from a different angle. Working with her teeth and paws together, she discovered that she could actually lift the cage and shove it around. Her spirits lifted, she carried on.  For an hour or more, she persevered, circling the cage, lifting it up, flipping it over, and pushing it around. I was beginning to admire her persistence and even considered going outside to lend a hand, when finally the lid to the cage popped open and she had access! NOW she could nibble on the end of the seed cake, but there wasn’t enough room for her to squeeze into the cage and enjoy a full meal. She knew she had to somehow get the cake out of the cage. So she rejoined the battle! More circling, flipping, and pushing ensued, and now the teeth and paws really got a workout. Here are some closeups of the action: 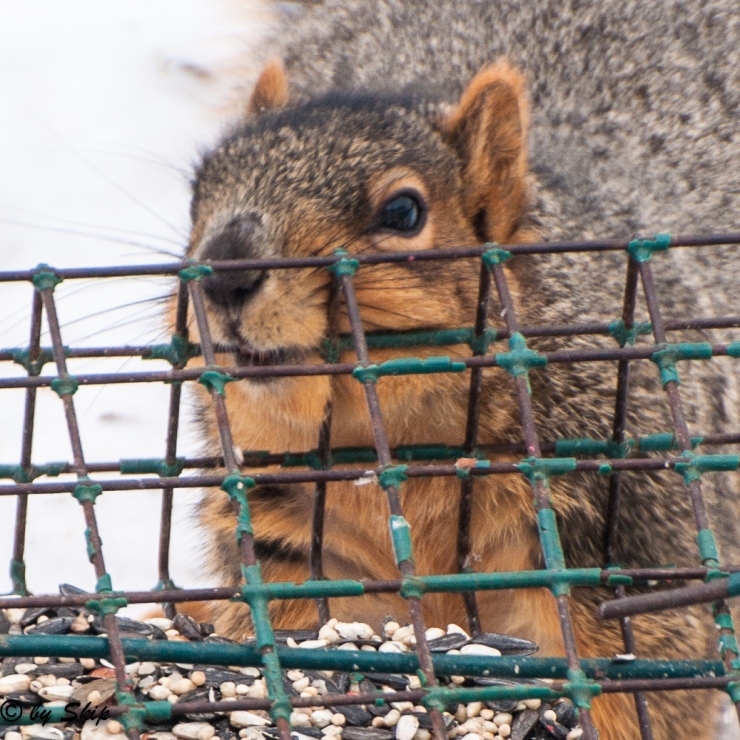 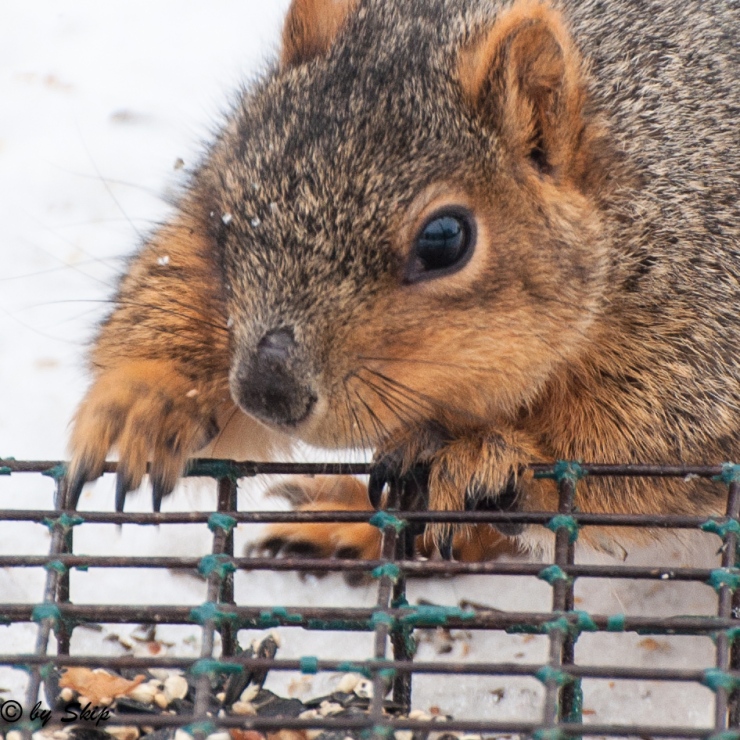 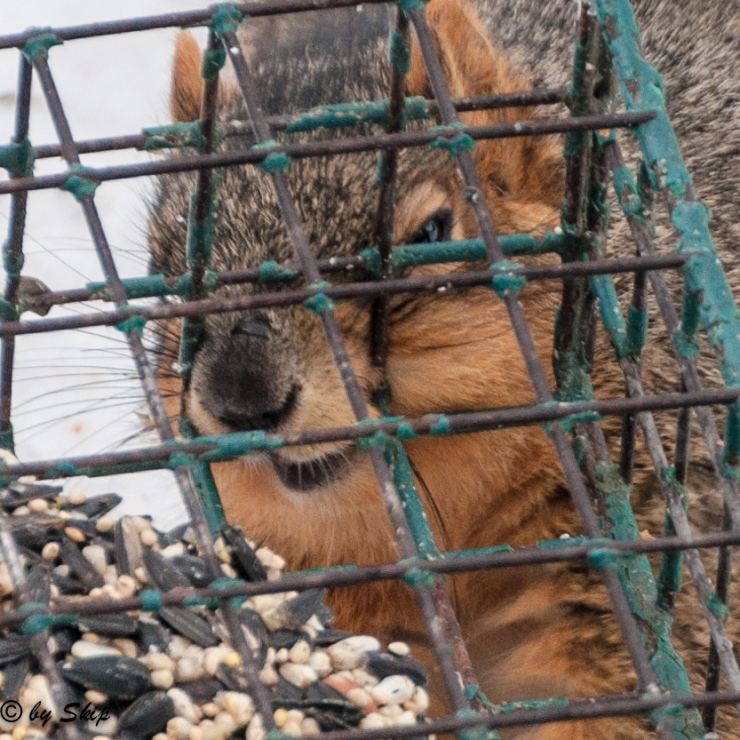 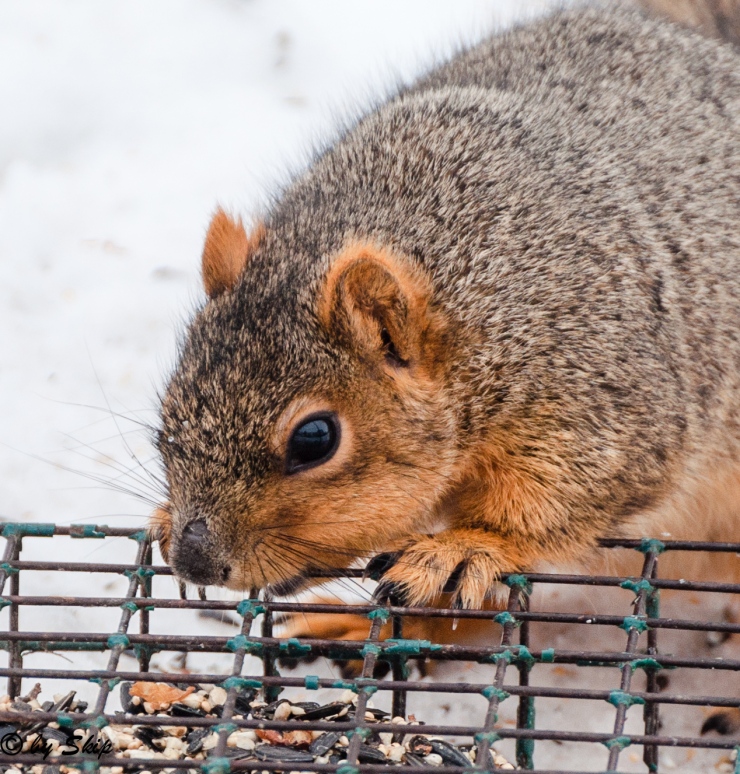 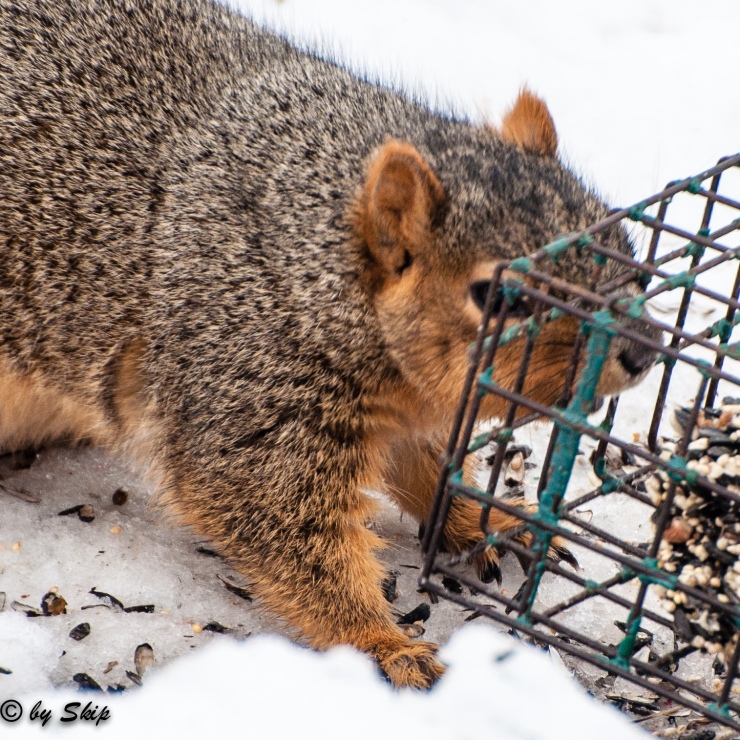 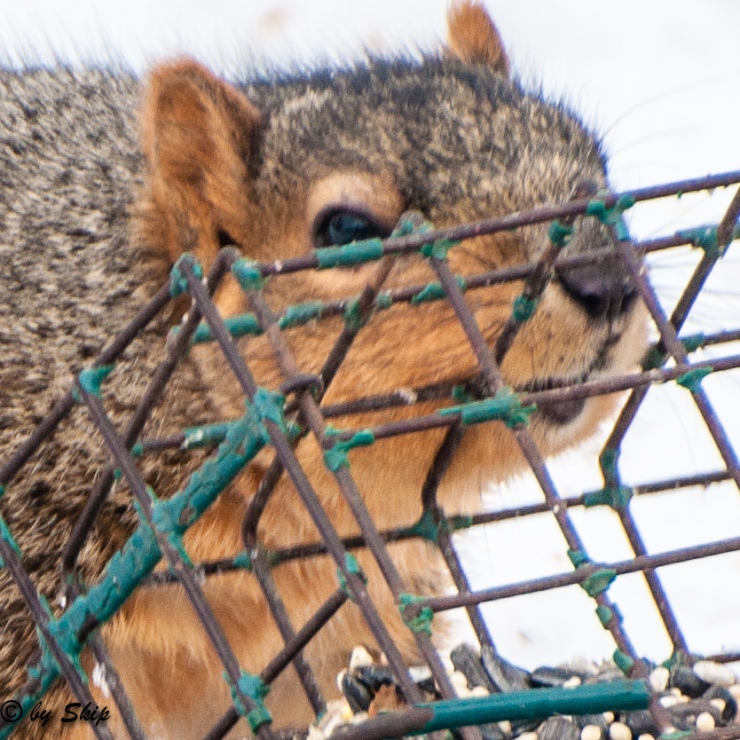 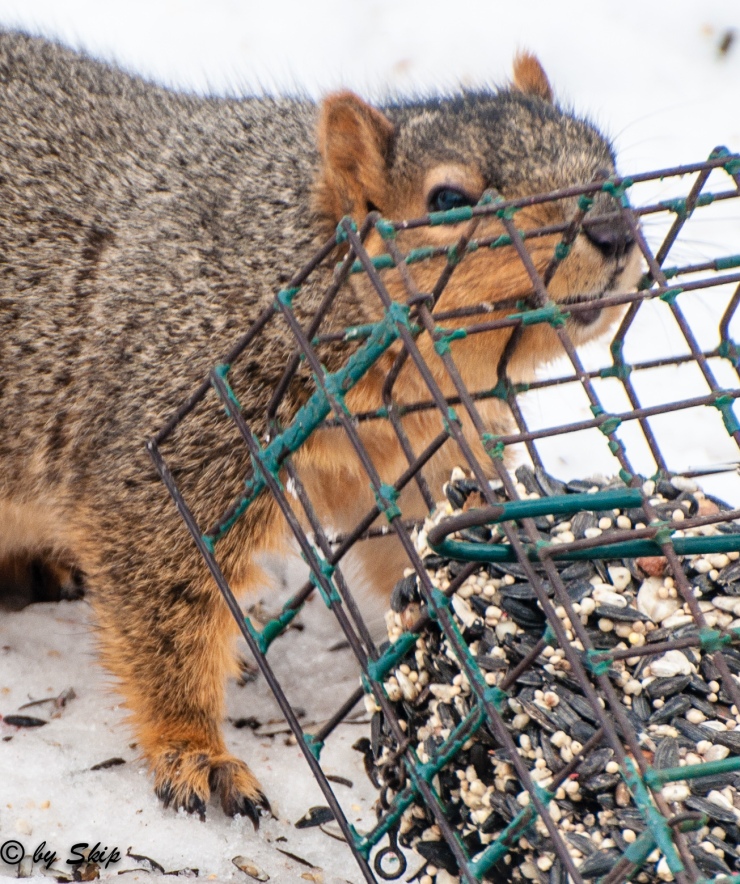 Eventually I ran out of time for documenting the action, but I’m here to report that by the end of the afternoon  the seed cake had been devoured. Determination and perseverance had paid off, and a  small squirrel had won the day! This morning the empty cage lay on the ground with a small squirrel standing nearby, probably wondering how long it was going to be before I put a new seed cake in the cage.

2 Replies to “A determined squirrel!”