When I walk the trail in the park, I frequently encounter a person I’ve never met. This was one of those days. Sometimes when that happens the thought runs through my mind, “This person would be a great addition to my Friday Faces gallery,” and I will take a deep breath, engage them in conversation (it helps if they have a dog), and eventually get to the point. Explaining about my Friday Faces gallery, I say, “Would it be okay if I take your picture?” Believe it or not, most people quickly recover from the shock of being approached by a complete stranger, and nine out of ten will say “Yes,” or “Where do you want me to sit,” or some variation of that question, and the photoshoot begins. 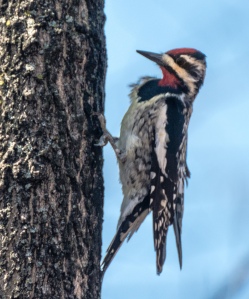 This time it didn’t happen that way. Here’s what actually happened. I was photographing this yellow-bellied sapsucker, when two people came down the trail and stopped before they got close to me. Sometimes thoughtful people will do that so they don’t scare off the bird, and this couple was that thoughtful. They didn’t seem to be in any hurry, and when the bird eventually flew away we started to chat, and to my delight, the gentleman said,“Why don’t you take my picture? You won’t get too many opportunities to take the picture of a World War II vet. There aren’t that many of us left.” I’m really not sure of his exact words, but I do know that I quickly exclaimed, “I would love to take your picture!” The photo shoot was on, and he was great!

It’s always a good idea to chat with your subject to make them feel at ease, and that’s one of my favorite parts of these photo opps; however, making this fellow feel at ease was absolutely not necessary. He told me his name and made sure I spelled it right: Lud Lekson. He wanted me to know that he was 92 years old and had served in the Merchant Marines during WWII, entering the service when he was only 20 years old. As I clicked away, frame after frame, I learned that he was one of five brothers who served, four in the Second World War and one in the Korean War. To my comment that it must have been very hard for his family to send four sons to war, he replied, “That’s the way it was. That’s what everyone was doing then.”

When I asked where Lud fell in that family of five, he wanted me to guess, but then quickly told me he was the middle son…”The one in the middle always gets passed over, you know.” He was especially proud that his oldest brother was a highly decorated paratrooper and an officer. Once, while Lud was stationed in the Philippines, he discovered that his brother was in the same area, just one island over, and they got permission to spend some time together.

When we finished our photo session, I walked with Lud over to where his wife Helen was patiently waiting on a park bench. Even though I had come to the park intending to get some much needed exercise and take a few pictures, I wasn’t in any hurry to end this encounter.  I was enjoying this unexpected blessing. Lud Lekson is a charming man. The twinkle in his eye and his ready chuckle only add to his charm, but when I told him he was quite the charmer, he replied, “I have a lot of BS. Do you know what that means?” I assured him I do, and I suspect there is more than a little truth to his claim, but the twinkle in his eye in no way belies the absolute sincerity and pride in his voice as he recounted his experiences during those long ago war years. When we parted, Helen and Lud headed down the trail one way and I went the other, knowing I had been honored to listen to his story and learn a little of the history of one great American who, along with four brothers, served his country well.

Thank you, Lud and Helen, for taking the time for today’s photo shoot and some very special conversation. I am delighted to add your pictures to my Friday Faces. Click here to see the gallery.