Living only a mile south of Lake Erie has both advantages and disadvantages. Today I experienced both. The lake was almost 100% covered by ice this winter. We experienced the coldest February on record when the temperature hovered in the single digits for many days. As a result, spring has been very slow in arriving. We had a taste of it last week and hoped it was here to stay, but it waved goodbye this week with high winds and temperatures falling to near freezing at night and only reaching into the mid-forties during the day. The advantage of living here is that we are located on the flyway taken by many birds on their spring and fall migration. Many Canada-bound birds that don’t live here year round pause in our parks and neighborhoods to rest and refuel before flying across Lake Erie.

Early May is the  peak of the warbler migration through our area. Magee Marsh Wildlife Area, west of Cleveland on Lake Erie, is dubbed the warbler capital of the world! I drove out there one year with my daughter on “International Migratory Bird Day” and was amazed by the number of birds and birders. It was fun and exciting, but also very crowded.  It was a challenge to walk 20 steps without colliding into someone with their eyes to the sky or the tree tops.

Due to the cool weather, the migration is not yet in full swing, but on my walk in the park today I was lucky enough to come across a ruby-crowned kinglet and to actually get several photos of him, including one that shows the ruby spot that gives him his name. He is the second smallest bird in Ohio, a lovely little bird. Take a look (Click a bird to see the larger version). 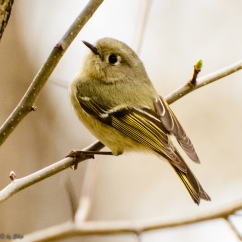 That’s all for today. Despite the chill in the air, I was glad I took a walk in the park.

See you soon.
Carolyn aka Skip